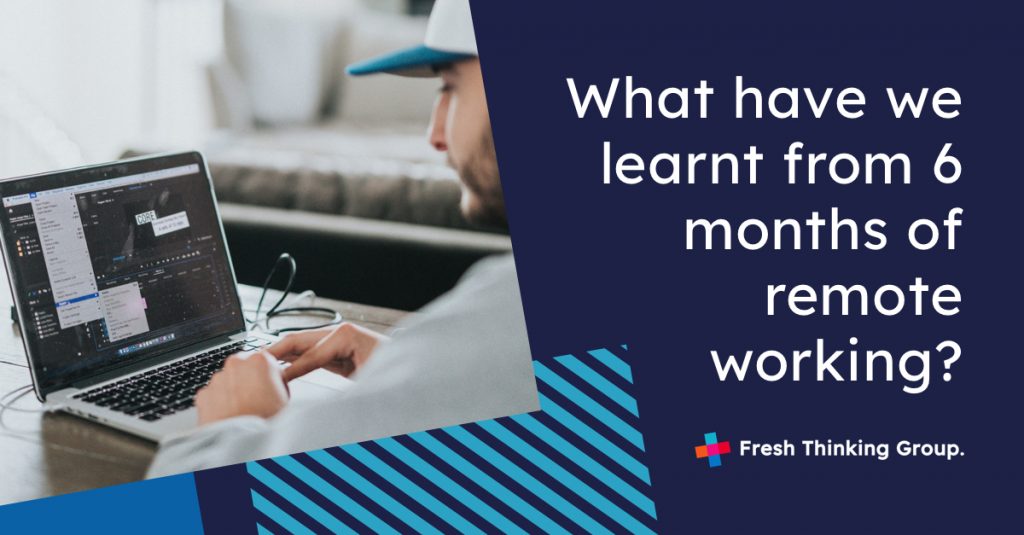 We are coming up to 6 months of remote working being the norm. On the 16th March 2020, Boris Johnson announced that employees across the UK should work from home if they can. Since then, employees across numerous industries have packed up their stuff from the office, and started working from home. Some were optimistic about the move, some were worried about how working from home would function if they had children in the house. Either way, we are now approaching the 6 month milestone in which many of us have been working from home. So, what’s changed and what have we learnt?

Remote working is faring better than many expected.

The transition to remote working literally happened overnight for many businesses. For some businesses who already offered remote working opportunities, this was possibly less of a culture shock and blow to their business. However, some businesses yet to offer remote working in any form, were hesitant to think it would work, resulting in a culture shock and scramble to reassess their processes to ensure business stayed on track. The question asked globally was, how will things work if we are all working from home? It turns out, not that differently. Shares in online video tools such as Zoom and Microsoft Teams soared, as well as communication platforms such as Slack and Microsoft Team chat, as video meetings took precedence over real life meetings.

As a whole remote working has been a success for most. Some businesses are considering trading in their offices altogether as they’ve realised the benefits of remote working, including improved employee mental health, and reduced commute time and costs. Other businesses are now opening up their offices, yet still allowing employees to have the option to work from home if they wish.

With some employees enjoying working from home, and some looking forward to getting back to the office, it’s become a realisation that everyone works differently. Some employees have found that working from home actually makes them more productive. They have more time in their day due to lack of commute which means they can enjoy doing hobbies before and after work. In some cases employees are sleeping better as they don’t have to get up early which all leads to a happier and overall productive workforce.

On the opposite end of the spectrum, some employees feel less productive working remotely. For employees with small children in the house and other distractions, going to the office created a clear divide between work and home, and a space to concentrate on work. For people who live alone, the office also provides an opportunity to socialise with others. Lots of employers have seen the need to offer options going forward, a space to socialise with colleagues if needed, as well as remote working opportunities.

Other industries have benefited from large scale remote working.

As well as digital products such as Zoom and Teams, other unrelated industries have seen a positive outcome and boost to their industry as a result of remote working. The news came out this week that English golf clubs have collectively seen 20,000 new members join their courses in the three months since most golf clubs reopened. This is the biggest membership growth for a three month period in history. Similar statistics have also been revealed for tennis clubs throughout the UK. More golfers are fighting for tee times and midweek evening golf has soared. The rise in people working from home means they now spend less time in the cities. With lots of commuters in Southern England spending hours of time commuting into London, they now have more time to play golf, and get outside during the summer months. There has also been a 372 per cent increase in tennis court bookings since they reopened in May when compared to last year’s statistics. It’s interesting to note that these two sports were the first to be allowed after lockdown, and can be easily played whilst enforcing social distancing.

As well as golf and tennis, local businesses such as restaurants and cafes have also seen an increase in customers midweek since they reopened. With more people working from home and spending all day inside, nipping out to their local restaurant and pub after work has become more appealing, and with employees spending less money on lunch and commuting, some have more income to spend locally.

Whilst golf courses and tennis courts are prospering, the same can’t be said for as many inner city establishments. Eateries such as Pret-A-Manger and Itsu are based in city centres to feed city workers on their lunch breaks. Being cheaper than most restaurants yet tastier than a meal deal they are a popular choice for many workers lunches. With less workers visiting cities and instead working from home, could these establishments continue to operate if working from home becomes a permanent move?

Remote working could also impact the housing market. City living is popular with workers because it generally equates to a shorter commute to work as well as living in the hustle and bustle of the city. With cities not generally ‘bustling’ these days and with remote working taking precedence, could house prices in the city centre drop due to a lack of demand?

Most employees are enjoying working from home. Recent studies from May have shown that 54% of people would prefer to stay working from home, and the Financial Times recently released an article revealing that city employers in London are planning for a lasting switch towards remote working. So, it looks like remote working is here to stay, at least for the majority of 2020.